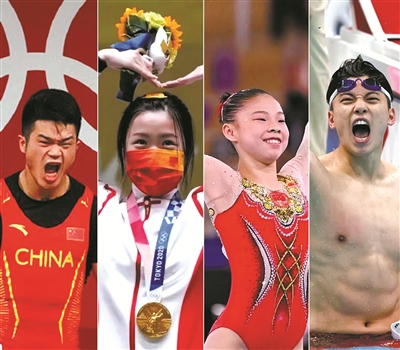 On Sept 16, Ningbo was awarded the "City of Olympic Champions" trophy by the Chinese Olympic Committee.

Other recipients of the honor, which recognizes a city's outstanding contributions to China's sports development, include Hebei Province's Baoding, Liaoning Province's Anshan, and Heilongjiang Province's Harbin and Qitaihe.

The Ningbo Sports School has been named a "national high-level sports talent reserve base" for four consecutive years. Over the past decade, the school's students have claimed 140 titles nationally and internationally, breaking national records on nine occasions.

Ningbo's athletes returned home from the Tokyo Olympics with five gold medals in August 2021. A month later, the city hauled in 20 golds, 11 silvers, and 11 bronzes at China's 14^th National Games, ranking fourth in the medal table.

The city's sporting prowess is inseparable from its sustained efforts to promote fitness among the public.

The proportion of citizens who regularly participate in physical exercise in Ningbo reached 30.62% in 2021, the highest in Zhejiang, according to one survey.

In addition, Ningbo is renowned for its dedication to cultivating sports talents. Local authorities have announced a plan to produce 100 top athletes, 1,000 outstanding athletes, and 10,000 backup athletes by 2025.

The 28-year-old, who won a gold in the 73-kilogram category at the Tokyo Games, has never forgotten his roots. He often returns to Ningbo No. 2 Youth Amateur Sports School, where he spent the early stages of his career.

"I came here for my first training program in 2008. At that time there was just one building on the campus," Shi said.

"Over the years, I witnessed the development of the school, while they witnessed my growth. This is my home and I love coming here to train. Successful veteran athletes can be great motivators when they train alongside their younger counterparts. I always like spending time with the youngsters. If they do something wrong, I will point it out-it's an effective training tactic."

Ningbo born-and-bred Wang Shun did the city proud in the Tokyo 2020 pool, powering to gold in the 200m individual medley. A month later, he bagged a whopping six gold medals at the National Games.

"I encountered many difficulties during my preparation for the Tokyo Games, including injuries. But none of it stopped me from chasing my dream of winning the gold medal."

Yang Qian, who shot to overnight fame by winning the first gold of the Tokyo Games in the women's 10m air rifle, spent her formative years at the Ningbo Sports School. After claiming individual medals, Yang won another gold as part of the 10-meter air rifle mixed team.

18-year-old Guan Chenchen won a women's balance beam gold at the Tokyo Olympics. In 2012, Guan was sent to the Zhejiang provincial gymnastics team by the Ningbo Sports School. In 2017, she became a member of the national gymnastics team.

Wu Chengjun, an official of the Ningbo Municipal Sports Bureau, says the city's sports infrastructure has been crucial to unleashing local athletes' potential.

"We have many preferential policies to support the development of competitive sports and the national fitness campaign," said Wu.

"From 2016 to 2020, we invested heavily in the sector, especially to upgrade sports facilities across our city. For example, ?470 million ($73 million) went into sports schools.

"We have also been attracting promising athletes and coaches from other cities through different programs that offer them good healthcare, plus high-quality education and employment opportunities for their family members."

The Ningbo Sports School, established in 1956, has long been a cradle of champions and continues to churn out elite performers.

"I'm a Ningbo native. I get very excited every time I speak of my hometown. I spent my childhood the same way that kids here now do, training every day. Ningbo's swimmers enjoy such great success today thanks to the collective efforts of generations of athletes and coaches. We have the best coaches, from the elite level to the grassroots level," said Wang Shun.