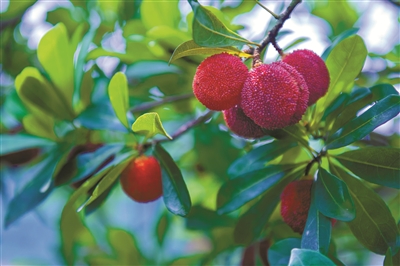 The waxberry. [Photo by Tang Yan] 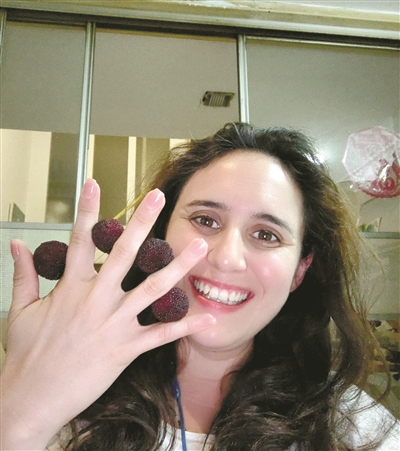 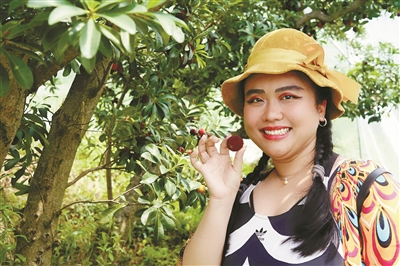 The waxberry, known locally as the yangmei, or Chinese bayberry, is the fruit of the wax myrtle tree. They have been harvested for thousands of years in Ningbo and used medicinally from ancient times.

In mid-June, when the fruit is in season, waxberry picking tours become popular; one of the reasons why at this time every year, Ningbo welcomes large groups of tourists from surrounding cities, coming to pick and savor the waxberry.

Yet, how do our international friends think of Ningbo's waxberry? Recently, the reporter invited two friends from the reading club of the Ningbo Times to share their waxberry stories.

Waxberry is One of the

Events in My Life

Sol Castro is from Mexico and has been working in a school as a project coordinator for four years.

"The first time they offered me a waxberry fruit, I thought it would hurt my tongue because on the outside it looked like full of little spikes," Sol laughed. Once she tried it, she just fell in love with the taste. Since then, this berry has become her summer love.

Nobody told Sol in the summer of 2018 that the waxberry season does not last long, so when she wanted to eat more, sadly there was no more.

Until in 2019, the beautiful red spheres returned, and she filled her freezer with them. This year will be the fourth year that she leaves no space in the refrigerator but waxberry, just to get enough reserves for her favorites until September.

"I have tried waxberry in every possible way: in jelly, syrup, pudding and jam; covered in dark or white chocolate; as a topping on pancakes and as a filling in cakes; with cream, cheese and yogurt; as stuffing for meat and chicken; in salad, with other fruits, nuts or vegetables; in ice cream and milkshakes. With salt, chili, or sugar, the flavor takes on different nuances and is always a delight to my palate," said Sol, "Just like the unforgettable scene where Bubba explains to Forrest Gump all the ways you can eat shrimp. Well, so me, I'm the Bubba of waxberries. "

In October 2019, Sol brought canned and dried waxberries and waxberry alcohol (yangmeijiu) to her family when she returned to her homeland.

"I felt like Marco Polo returning to his land, to talk about all the wonders that Ningbo has. I'm sure I was destined to live here, choosing to come to Ningbo from the other side of the world to get to know this wonderful culture full of history, colors, and flavors," Sol added.

Sol have a magnet in the shape of a waxberry on her fridge. "If I ever leave Ningbo, that magnet will be one of my most precious memories of my years living in this beautiful city. It will forever be stuck to my refrigerator door, and every time I see it I will remember my sweet summers in Ningbo, sharing waxberries with my friends or enjoying them alone in a warm afternoon, and I know it will put a smile on my face," Sol said.

Waxberry is What I am

"I had never known of a fruit called waxberry until I first arrived in Ningbo in 2013," Sannia Mareta is from Indonesia. After picking and tasting the waxberry fruits herself, she has added waxberry to her favorite fruit list.

"It tastes sweet and sour at the same time - very refreshing. For 9 years of living in Ningbo, waxberry is what I am looking for every summer." Sannia said that not only does she love eating waxberry, but also she is interested in making other waxberry products such as waxberry fruit jam and yangmeijiu.

On June 15, she visited Sanqishi town in Yuyao, a county-level city in Ningbo. "Sanqishi town has a long history of planting waxberries," said Sannia.

The eleocharis waxberries, the best variety of waxberries from Yuyao, which have been being planted for more than 2,000 years, originated in the town. Its acidic soil and weather support the growth of waxberries. The fruit from the town is famed for its juicy and sweet taste.

In Sanqishi town, Sannia found that the Guyang Waxberry Forest is still home to more than 100 waxberry trees that are over 150 years old. The plantation area of waxberry in the town now stands at 800 hectares, and the annual waxberry production in the town is about 5,000 tons.

As waxberry became famous all over the world, the greenhouse waxberry came into being. Greenhouses provide a suitable environment for waxberries to grow, enables early-maturing, and ramp up the production of the fruits. The income of local villagers is also increased.

Sannia became involved in a livestream with local people to introduce the high-quality waxberries. She also selected and packed a box of the fruit. Convenient logistics will soon deliver the fresh waxberries to thousands of households.

The eleocharis waxberries have also been promoted and planted in 15 provinces across the country, including Yunnan, Sichuan, Fujian and Hunan, and have helped increase the incomes of farmers.